• This Hindu God Brahma Seated On Lotus figurine stands at 8" tall, 5.75" long and 4.75" deep approximately.
• This Hindu God Brahma Seated On Lotus figurine is made of designer composite resin, hand painted and polished individually. Color tone may vary from pictures.
• This statue depicts Hindu God Brahma with four heads, four faces and four arms seated on Lotus. He is shown as having four arms, with none holding a weapon, unlike most other Hindu Gods. One of his hands is shown holding a scepter in the form of a spoon, which is associated with the pouring of holy ghee or oil into a sacrificial pyre - indicating the fact that Brahma is the lord of sacrifices. Another of his hands holds a water-pot (sometimes depicted as a coconut shell containing water).
• Continued: The significance of the water is that it is the initial, all-encompassing ether in which the first element of creation evolved. Brahma also holds a string of malas that he uses to keep track of the Universe's time. He also is shown holding the Vedas, and sometimes, a lotus flower.
• Soda can placed next to the statue is not included with the listing. It is meant to provide size perspective of the item. 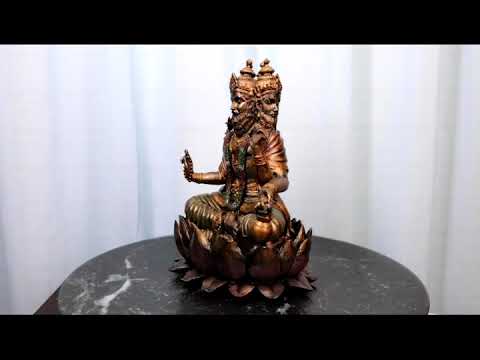