• This Sigil Of Baphomet LED Gazing Ball is made of polyresin and glass, hand painted and polished individually.
• This Sigil Of Baphomet LED Gazing Ball measures approximately 4.5"Tall, 4"Wide and 3.5"Deep. It weighs about 1.75 pounds.
• This Sigil Of Baphomet LED Gazing Ball is a unique occultic decor with LED night light capability. It is AA battery operated (NOT INCLUDED).
• Baphomet is an enigmatic, goat-headed figure found in several instance in the history of occultism. From the Knights Templar of the Middle-Ages and the Freemasons of the 19th century to modern currents of occultism, Baphomet never fails to create controversy. Baphomet embodies the culmination of the alchemical process - the union of opposing forces to create Astral Light - the basis of magic and, ultimately, enlightenment.
• Soda can and props placed next to the figurine are not included with the listing. They are meant to provide size perspective of the item. 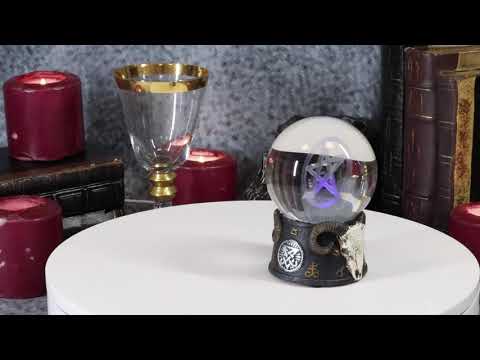