• This Satanic Pentagram Baphomet Sabbatic Goat decorative box measures 6.5" long, 3.25" wide and 3.5" tall approximately. The box weighs 2 lbs 11oz approximately.
• This Satanic Pentagram Baphomet Sabbatic Goat decorative box is made of designer polyresin, hand painted and polished individually.
• Baphomet is a term originally used to describe an idol or other deity which the Knights Templar were accused of worshiping, and subsequently incorporated into disparate occult and mystical traditions. Later in the 19th century, the name of Baphomet became further associated with the occult. Eliphas Levi published Dogme et Rituel de la Haute Magie ("Dogma and Rituals of High Magic")
• Lévi's depiction of Baphomet is similar to that of The Devil in early Tarot. This decorative box is functional enough to store basic knick knacks. Jewelry in picture is not included with the listing. The box is designed in the shape of a pentagram with the face of the Baphomet as the focal point. 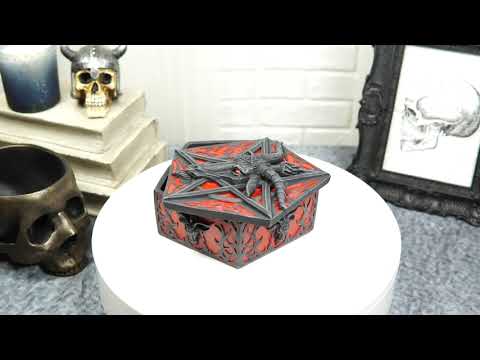