• This President Donald Trump With Thumbs Up And Red Hat 2020 Statue is 10" tall, 6.75" long and 5" deep approximately. He weighs about 2.25 pounds.
• This President Donald Trump With Thumbs Up And Red Hat 2020 Statue is made of designer composite resin, hand painted and polished individually. Color tone may vary slightly from pictures.
• Considered the wild card of the 2017 presidential nomination, President Donald Trump rose to power and seized a landslide victory over Democratic Candidate Hillary Clinton. 4 years later, Donald Trump is running again for President to continue his legacy to Keep America Great!.
• This hilarious sculpture depicts the President with a wide, brilliant smile, after 4 years of phenomenal presidency. He is running again for a second term and his slogan now is 'Keep America Great'. President Trump has his iconic 2020 Red Hat on and he is giving his signature 2 thumbs up to his adoring crowd.
• Soda can and decor props placed next to the statue are not included with the listing. They are meant to provide size perspective of the item. 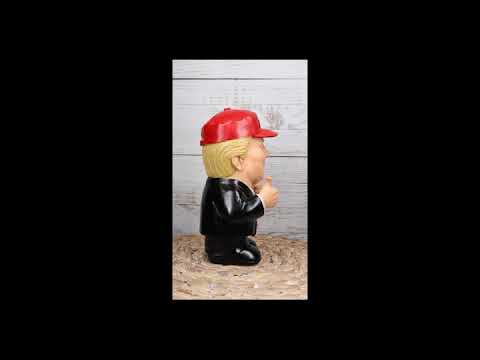