• This Sigil Of Lucifer And Baphomet Sandstorm Ball is made of polyresin, glass and black sand glitters.
• This Sigil Of Lucifer And Baphomet Sandstorm Ball measures approximately 6"Tall, 4.5"Wide and 4"Deep. It weighs about 2 pounds.
• This Sigil Of Lucifer And Baphomet Sandstorm Ball does double duty as a unique fantasy decor as well as a whirling sandstorm ball. The Sandstorm feature works on Battery (Not Included) or by standard USB cable (usable across the globe). The storm ball has a setting for sound sensor activation which triggers On when you clap your hands or when a loud sound is produced near it.
• Baphomet is an enigmatic, goat-headed figure found in several instance in the history of occultism. From the Knights Templar of the Middle-Ages and the Freemasons of the 19th century to modern currents of occultism, Baphomet never fails to create controversy. Baphomet embodies the culmination of the alchemical process - the union of opposing forces to create Astral Light - the basis of magic and, ultimately, enlightenment.
• Soda can and props placed next to the figurine are not included with the listing. They are meant to provide size perspective of the item. 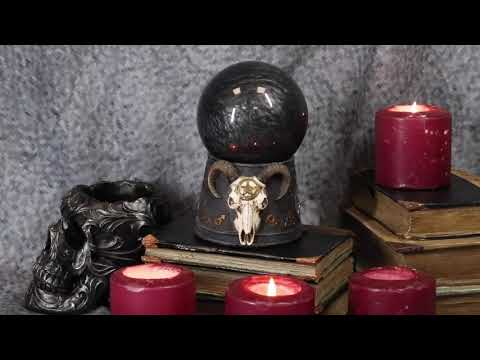