• The Native American Indians believed that Dreamcatchers caught negative dreams in their web like structure and held them until daylight when the sunlight hit them at dawn, the negative energy caught in the web was destroyed.
• Feathers were worn by Native American Chiefs to symbolize their communication with Spirit, and to express their celestial wisdom. In the context of a dreamcather, the feathers act as a fluffy, pillow-like ladder that allows good dreams to gently descend upon the sleeping person undisturbed.
• In the mythology of many Northwest Indian tribes, Raven is honored as a culture hero. He is a revered and benevolent transformer figure who helps the people and shapes their world for them, but at the same time, he is also a trickster character and many Raven stories have to do with his frivolous or poorly thought out behavior causing trouble for him and the people around him.
• The unpredictable Raven Raven is noted for negative traits such as gluttony, greed, and impatience as well as for his heroism and great deeds. Turquoise stands for water and for sky, for bountiful harvests, health and protection. Together the union of the raven and the turquoise rock harnesses the positive traits of both, creating the energy flow of harmony and success.
• This Dream Catcher measures 17.25" High from the end of the feather to the top of the hanger. The dreamcatcher weighs about 8 ounces. The dream catcher part with the webbed ring and feathers measure 6.75" High, 6.5" Wide and 1.25" Thick. This Dream Catcher contains feathers and beads as ornaments. 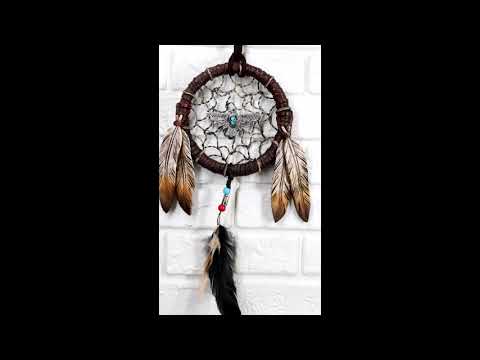