• This Holy Roman Empire Crusader Knight Statue is made of silver electroplated polyresin, handpainted and polished individually.
• This Holy Roman Empire Crusader Knight Statue measures approximately 7" tall, 6.25" wide and 4" deep.
• Medieval knighthood is a major title to have in the age of kings. This distinctive looking knight is the Holy Roman Empire's elite crusader warrior. The Crusader Knight of the Cross is in full armor, carrying a long sword and shield. His body plate bears the mark of the cross. He leans forward, with his sword in is right hand and the shield on his left, as he prepares to engage an enemy in the battlefield.
• The sword part comes detached from the figurine for safe shipping. It is recommended that you super glue the sword into its designated hole upon receipt of the statue.
• This is an Ebros Gift exclusive collection. 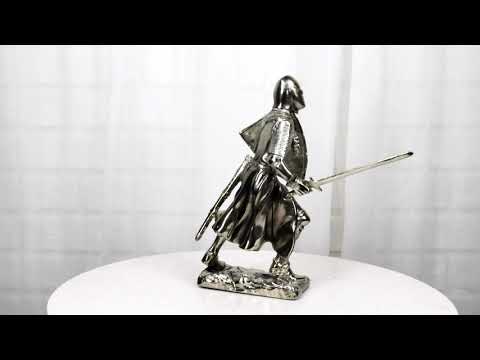