• This Devi Goddess Kali Statue is 9" tall, 5.5" long and 3.75" wide. It weighs about 1.75 pounds.
• This Devi Goddess Kali Statue is made of designer composite resin, hand painted and polished individually.
• This statue depicts the Hindu Goddess Kali standing on top of her husband Shiva. Kali has just gone on a cosmic rampage killing demons, and has become drunk on their blood. To placate her, Lord Shiva has thrown himself at Kali's feet, so that she would awaken from her drunken blood fest.
• This is a graphic representation of the Goddess of Doomsday, death and destruction, Kali is seen to wear a necklace stringed with human heads, one hand holding a giant severed head while another holds a trident spear and sickle.
• Props in photos are not included with the items. 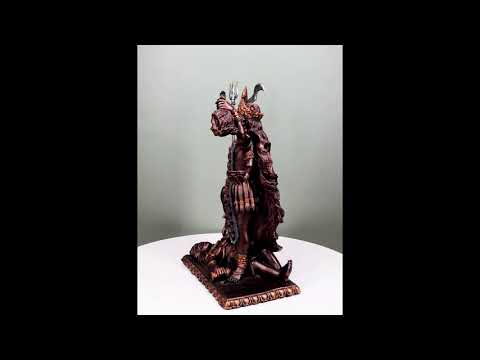