• This Greek Primordial Deity Goddess Gaia figurine measures 9" tall, 5" wide and 2.75" deep approximately.
• This Greek Primordial Deity Goddess Gaia figurine is made of premium grade cold cast polyresin, hand painted and polished individually.
• Gaia (Gaea) was the goddess of the earth. She was one of the primoridal elemental deities (protogenoi) born at the dawn of creation. Gaia was the great mother of all creation--the heavenly gods were descended from her through her union with Ouranos (Uranus) (Sky), the sea-gods from her union with Pontos (Sea), the Gigantes (Giants) from her mating with Tartaros (the Pit), and mortal creatures born directly from her earthy flesh.
• This statue is a beautiful personification of the Goddess Gaia, holding the earth in her palms. The earth is small compared to her sheer size. Gaia is decorated with flora and fauna and her legs are shaped like roots growing from the soil. She is the mother of the earth, the beginning of all things. 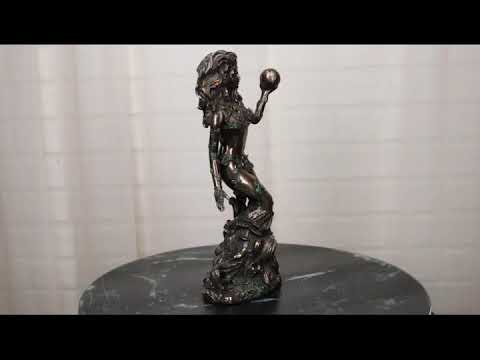