• This Goddess Hecate Figurine is 10.5" tall, 5.5" wide and 4.75" deep approximately. She weighs about 3 pounds.
• This Goddess Hecate Figurine is made of designer composite resin, hand painted and polished individually. Color tone may vary
• HEKATE (Hecate) was the goddess of magic, witchcraft, the night, moon, ghosts and necromancy. She was the only child of the Titanes Perses and Asteria from whom she received her power over heaven, earth, and sea. Hekate assisted Demeter in her search for Persephone, guiding her through the night with flaming torches. After the mother-daughter reunion became she Persephone's minister and companion in Haides.
• Here in this masterpiece, she is depicted standing on flaming crossroads with her skull torch, birthing knife, serpents and wearing a crown. The Pentagram is on her forhead; RX around her neck resting on her chest (symbol of the Healer), a bat face is seen between her breasts; the Triple Moon Design is on her stomach.
• This is an Ebros exclusive collection. Coke can placed next to the statue is not included with the listing. It is meant to provide size perspective of the item. 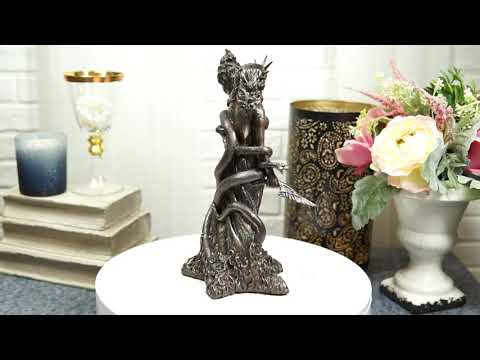