• This Goddess Isis sculpture stands at 6.25" tall, 1.5" long and 1.5" deep approximately. It weighs about 3 ounces.
• This Goddess Isis sculpture is made of designer composite resin, painstakingly hand painted and polished.
• The Egyptian goddess Isis was worshipped throughout Egypt, even from very early dates. Isis was considered to the patron saint of women, mothers and children. Additionally, ancient Egyptians referred to her as Isis the goddess of magic. It is told that she managed to trick Re into revealing his secret name to her and in doing so, Isis obtained many magical powers. Unlike many Egyptian gods and goddesses, she remained in the same form from the beginning of her history to current dates.
• The Egyptian goddess Isis achieved much fame throughout history and many temples were dedicated to her honor and for the purpose of worshipping her.
• Props and coke can in photos are not included with the item. They are meant to provide size perspective of the item. 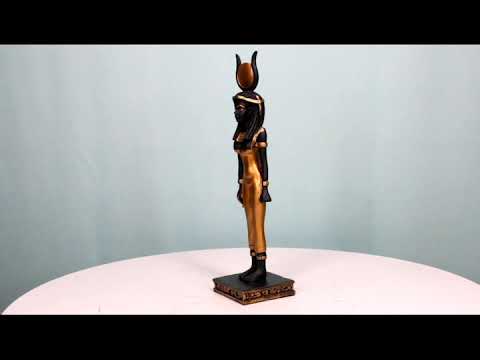