• This God Khnum On Solar Boat Figurine is made of polyresin, hand painted and polished individually.
• This God Khnum On Solar Boat Figurine measures 6.25" High, 5.75" Wide and 2" Deep approximately. It weighs about 15 ounces.
• Khnum was one of the earliest-known Egyptian deities, originally the god of the source of the Nile. Since the annual flooding of the Nile brought with it silt and clay, and its water brought life to its surroundings, he was thought to be the creator of the bodies of human children, which he made at a potter's wheel, from clay, and placed in their mothers' wombs. He was later described as having molded the other deities, and he had the title "Divine Potter".
• Props in photos are not included with the item. 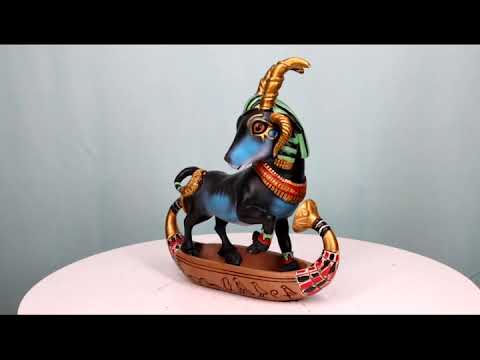