• This Egyptian Anubis God Sculpture is made of polyresin, hand painted and polished individually.
• This Egyptian Anubis God Sculpture measures 5.75" High, 5.75" Wide and 4" Deep approximately. It weighs about 13 ounces.
• Like many ancient Egyptian deities, Anubis assumed different roles in various contexts. Depicted as a protector of graves as early as the First Dynasty (c. 3100 - c. 2890 BC), Anubis was also an embalmer. By the Middle Kingdom (c. 2055 - 1650 BC) he was replaced by Osiris in his role as lord of the underworld. One of his prominent roles was as a god who ushered souls into the afterlife. He attended the weighing scale during the "Weighing of the Heart" in the afterlife.
• This Anubis box is perfect for holding most stationery or as a decorative box to keep your coins, keys and more.
• Props in photos are not included with the item. 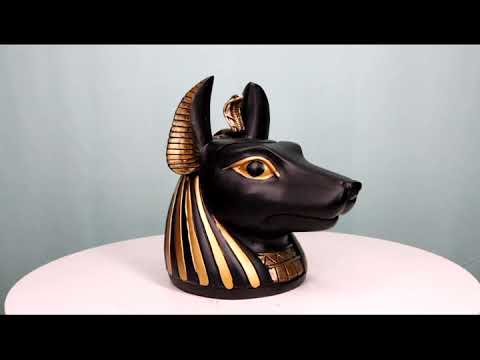