• This Dramatic Egyptian Deity Thoth Flamingo Statue measures 7.75" tall, 4.75" long and 3.5" deep approximately. It weighs about 1.5 pounds.
• This Dramatic Egyptian Deity Thoth Statue is Made of High Quality Cold Cast Polyresin, Handpainted and Polished.
• Thoth was considered one of the more important deities of the Egyptian pantheon. In art, he was often depicted as a man with the head of an ibis or a baboon, animals sacred to him. In this sculpture, Thoth is dramatized in the the form of a flamingo with Ibis head. Portrayed in vivid colors of white, blue, green, gold and more, this sculpture is exotically beautiful!
• Thoth is associated with the arbitration of godly disputes, the arts of magic, the system of writing, the development of science, and the judgment of the dead. 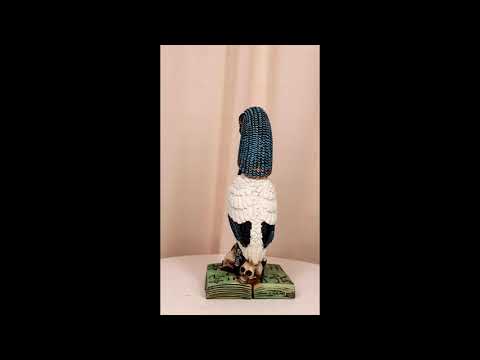