• This Classical Egyptian Deity Thoth Statue measures 12" tall, 7" long and 3.5" deep approximately.
• This Classical Egyptian Deity Thoth Statue is Made of High Quality Cold Cast Polyresin, Handpainted and Polished.
• Thoth was considered one of the more important deities of the Egyptian pantheon. In art, he was often depicted as a man with the head of an ibis or a baboon, animals sacred to him. Thoth is almost always shown holding a Was (a wand or rod symbolizing power) in one hand and an Ankh (the key of the Nile symbolizing life) in the other hand. His feminine counterpart was Seshat, and his wife was Ma'at.
• Thoth is associated with the arbitration of godly disputes, the arts of magic, the system of writing, the development of science, and the judgment of the dead.
• This is an Ebros exclusive collection. 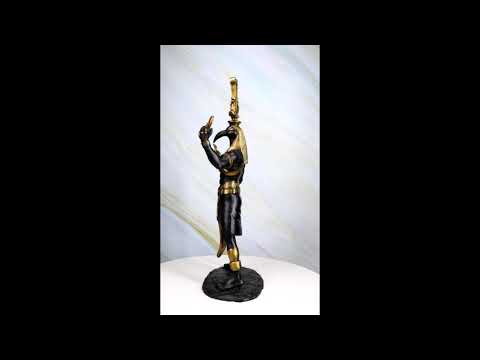