• This Classical Anubis sculpture stands at 6.75" tall, 2.25"long, 2" Wide. It weighs about 5 ounces.
• This Classical Anubis sculpture is made of designer composite resin, hand painted and polished individually.
• Anubis is the Greek name for a jackal-headed god associated with mummification and the afterlife in Egyptian mythology. One of his prominent roles was as a god who ushered souls into the afterlife. He attended the weighing scale during the "Weighing of the Heart," in which it was determined whether a soul would be allowed to enter the realm of the dead.
• The God Anubis Statue is depicted here with a golden staff, standing on a hieroglyphic base and holding the ankh amulet.
• Props in photos are not included with the item. They are meant to provide size perspective of the item(s). 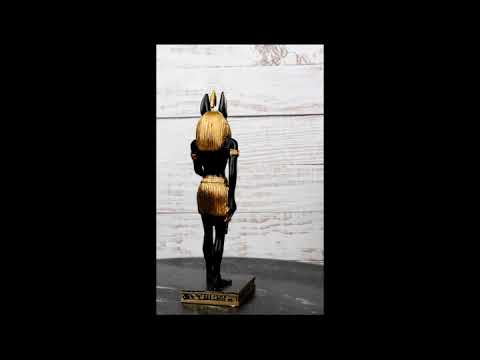