• This God Horus Wearing Pschent Crown Statue measures 12" tall, 7" wide and 3.25" deep approximately.
• This God Horus Wearing Pschent Crown Statue is made of cold cast polyresin, hand painted and polished.
• The name Horus is Greek. In Ancient Egypt he was known as "Heru" (sometimes Hor or Har), which is translated as "the distant one" or "the one on high"(from the preposition "hr" meaning "upon" or "above"). He was considered to be a celestial falcon, and so his name could be a specific reference to the flight of the falcon, but could also be seen as a more general solar reference. It is thought that the worship of Horus was brought into Egypt during the predynastic period.
• Horus begun as a god of war and a sky god who was married to Hathor, but soon became considered as the opponent of Set, the son of Ra, and later the son of Osiris. He was the protector and patron of the pharaoh. As Horus was associated with Upper Egypt (as Heru-ur in Nekhen) and Lower Egypt (as Horus Behedet or Horus of Edfu) he was the perfect choice for a unified country and it seems that he was considered to be the royal god even before unification took place.
• This is an Ebros Gift exclusive collection. 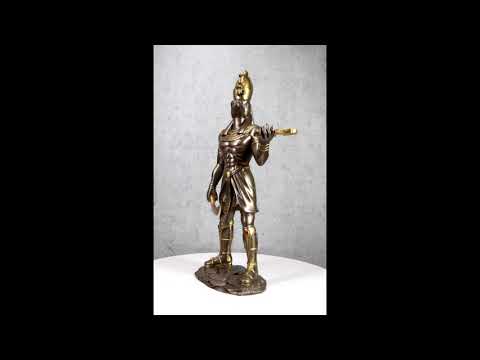