• This Classical Egyptian God Anubis Pen is made of polyresin, hand painted and polished individually. The pens are refillable as the bottom tip of the pen can be unscrewed.
• This Classical Egyptian God Anubis Pen measures 6" tall, 1" wide and 0.75" thick each.
• Egyptian culture has five thousand years of recorded history. Ancient Egypt was among the earliest civilizations and for millennia, Egypt maintained a strikingly complex and stable culture that influenced later cultures of Europe, the Middle East and other African countries.
• Anubis is the Greek name for a jackal-headed god associated with mummification and the afterlife in Egyptian mythology. One of his prominent roles was as a god who ushered souls into the afterlife. He attended the weighing scale during the "Weighing of the Heart," in which it was determined whether a soul would be allowed to enter the realm of the dead.
• Props in photos are not included with the item. This listing is for a pack of 6 pens. 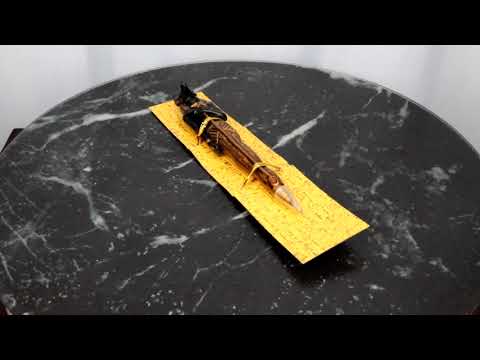