• This Primordial Titan Atlas Bearing Globe figurine is approximately 11.75" tall, 4" long and 4" deep. He weighs about 2.25 pounds.
• This Primordial Titan Atlas Bearing Globe is made of designer composite resin, hand painted and polished. Color Tone may vary
• Atlas was one of the primordial Titans. Atlas along with his brother Menoetius sided with the Titans in their war against the Olympians, the Titanomachy. His brothers Prometheus and Epimetheus weighed the odds and betrayed the other Titans by forming an alliance with the Olympians.
• When the Titans were defeated, many of them (including Menoetius) were confined to Tartarus, but Zeus condemned Atlas to stand at the western edge of the Gaia, the Earth and hold up Ouranos, the Sky on his shoulders, to prevent the two from resuming their primordial embrace. Atlas continues to be a commonly used icon in western culture (and advertising), as a symbol of strength or stoic endurance.
• This is an Ebros exclusive collection. Coke can placed next to the statue is not included with the listing. It is meant to provide size perspective of the item. 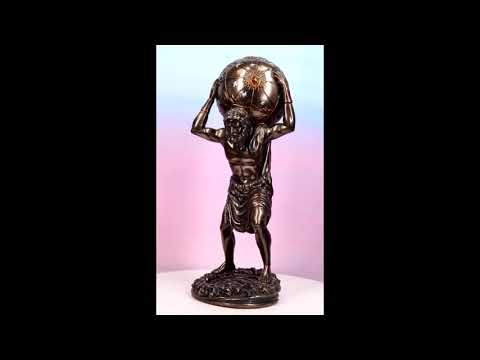