• This Mask Of King Tut Pharaoh Bust Statue stands at 4.25" tall, 2.75" long and 2.25" wide approximately. The sculpture weighs about 11 oz.
• This Mask Of King Tut Pharaoh Bust Statue is made of designer composite resin, hand painted and polished
• Relive one of the most celebrated and powerful era of Egyptian Dynasty with this mask of King Tut figurine. Adorned in his golden mask, King Tut rests in his casket tomb under the safety of a pyramid. This figurine is beautifully sculpted and hand painted by experts to showcase this ancient king.
• Tutankhamun (1341 BC - 1323 BC) was an Egyptian Pharaoh of the Eighteenth dynasty (ruled 1333 BC - 1324 BC), during the period of Egyptian history known as the New Kingdom. His original name, Tutankhaten, means "Living Image of Aten", while Tutankhamun means "Living Image of Amun". Often the name Tutankhamun was written Amen-tut-ankh, meaning "living image of Amun", due to scribal custom which most often placed the divine name at the beginning of the phrase in order to honor the divine being.
• This is an Ebros Gift exclusive collection. 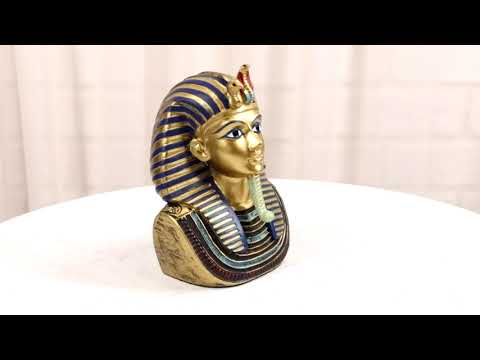