• This Solve Coagula Sabbatic Goat Baphomet Statue measures 7.75" tall, 5.75" long and 3.75" deep approximately. It weighs about 1 pound.
• This Solve Coagula Sabbatic Goat Baphomet Statue is made of cold cast polyresin, hand painted and polished individually.
• Baphomet is an enigmatic, goat-headed figure found in several instance in the history of occultism. From the Knights Templar of the Middle-Ages and the Freemasons of the 19th century to modern currents of occultism, Baphomet never fails to create controversy. Baphomet embodies the culmination of the alchemical process - the union of opposing forces to create Astral Light - the basis of magic and, ultimately, enlightenment.
• This rendering of Baphomet is not the original created by Eliphaz Levi (we sell that on a different listing) but Baphomet is comingled with Rodin's famous work The Thinker (Le Penseur) statue which is a contemplating man. Baphomet here is sculpted as a man with wings and a goat head, sitting on the globe with vines of snares as the base. The sculpting is immaculate and the details of the Baphomet will astound all eyes that see him. 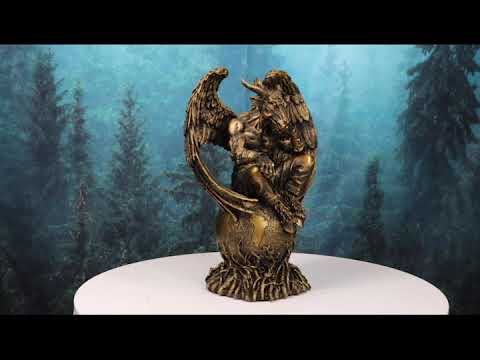