• This Awesome Sabbatic Goat Baphomet Statue stands 15" tall, 9.75" long and 6" deep
• This Awesome Sabbatic Goat Baphomet Statue is made of designer composite resin, hand painted and polished.
• This Awesome Sabbatic Goat Baphomet Statue is masterfully designed by Maxine Miller.
• Baphomet is a term originally used to describe an idol or other deity which the Knights Templar were accused of worshiping, and subsequently incorporated into disparate occult, satanic and mystical traditions. It appeared as a term for a pagan idol in trial transcripts of the Inquisition of the Knights Templar in the early 14th century. The name first came into popular English usage in the 19th century, with debate and speculation on the reasons for the suppression of the Templars.
• This is an Ebros exclusive collection. Coke can placed next to the statue is not included with the listing. It is meant to provide size perspective of the item. 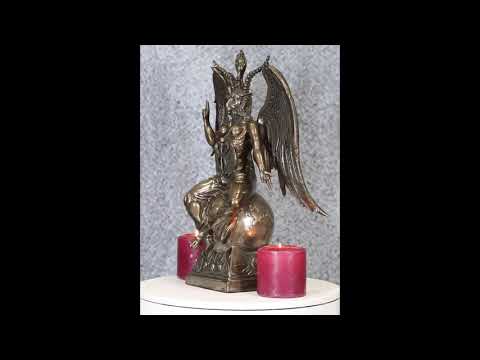