• This Ancient Egyptian Pharaoh King Tut Sandstorm Ball is made of polyresin, glass and yellow golden sand glitters.
• This Ancient Egyptian Pharaoh King Tut Sandstorm Ball measures approximately 7"Tall, 4"Wide and 4"Deep. It weighs about 2 pounds.
• This Ancient Egyptian King Tut Sandstorm Ball does double duty as a unique fantasy decor as well as a whirling sandstorm ball. The Sandstorm Sculpture works on Battery (Not Included) or by standard USB cable (usable across the globe). The sandstorm ball has a setting that allows for sound sensor activation.
• Tutankhamun (1341 BC - 1323 BC) was an Egyptian Pharaoh of the Eighteenth dynasty (ruled 1333 BC - 1324 BC), during the period of Egyptian history known as the New Kingdom. His original name, Tutankhaten, means "Living Image of Aten", while Tutankhamun means "Living Image of Amun". Often the name Tutankhamun was written Amen-tut-ankh, meaning "living image of Amun", due to scribal custom which most often placed the divine name at the beginning of the phrase in order to honor the divine being.
• This is an Ebros Gift exclusive collection. It comes with our Ebros Gift Satisfaction Guarantee when sold by Ebros Gift. Coke can and props placed next to the figurine are not included with the listing. They are meant to provide size perspective of the item. 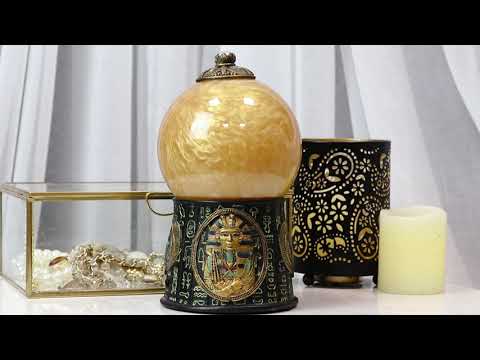