• This Archangel Michael statue measures 8.25" tall, 4" wide and 3.25" deep approximately.
• This Archangel Michael statue is made of high quality designer resin, individually handpainted and polished. Because each piece is partially hand crafted, color tone may vary from pictures.
• "The Angelic Council" is the Eastern Orthodox Church icon of the "Seven Archangels". They are named Michael, Gabriel, Raphael, Uriel, Sealtiel, Barachiel and Jehudiel. Saint Michael the Archangel is mentioned three times in the Book of Daniel. The idea that Michael was the advocate of the Jews became so prevalent that, in spite of the rabbinical prohibition against appealing to angels as intermediaries between God and his people, Michael came to occupy a certain place in the Jewish liturgy.
• Own this marvelous figurine of the archangel Michael, the patron saint of the Holy Eucharist Sacrament and the ultimate protector of men. Sculpted and handpainted on resin medium, this figurine stands on a wooden base with his name written on a brass plate.
• This Archangel Statue is an Ebros Gift exclusive collection. 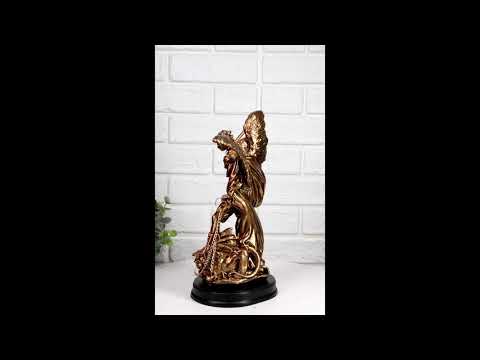