• This Allegorical Victory Statue measures at 9" long 7.25" wide and 12" tall approximately. She weighs about 3.75 pounds.
• This Allegorical Victory Statue is made of designer designer composite polystone resin, hand painted and polished. Polystone which is composed of polyurethane, resin, and mixed with powdered stone additives that give it added weight and a porcelain or "stone-like" feel. Polystone is very durable and delivers a cleaner, more substantial representation of an original sculpture than other common materials.
• Adapted from the full-size figure of Victory on Saint-Gaudens's equestrian monument to the Civil War general William Tecumseh Sherman (1892-1903; Grand Army Plaza, Manhattan), this winged allegorical figure is depicted as a triumphant guiding force. Her classicizing gown is emblazoned with an eagle, and she wears a crown of laurel and holds a palm frond-both traditional emblems of victory.
• The windblown pose recalls that of the Hellenistic marble "Nike of Samothrace" (Musée du Louvre, Paris). The principal model for Victory was Hettie Anderson, an African-American woman who was a favored artists' model in New York during the 1890s.
• This is an Ebros Gift exclusive collection. It comes with our Ebros Gift Satisfaction Guarantee when sold by Ebros Gift. Coke can in photos not included with the tiem. 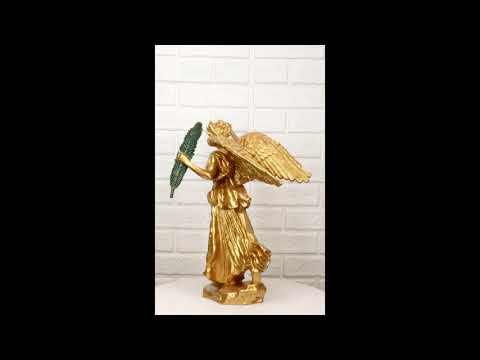