• This Detailed Statue of Anubis With The Scales Of Justice measures 10" tall, 6" wide and 3.25" deep approximately. It weighs about 1.5 pounds.
• This Detailed Statue of Anubis With The Scales Of Justice is made of designer composite resin, hand painted and polished. Color tone may vary slightly from pictures.
• Anubis is the Greek name for a jackal-headed god associated with mummification and the afterlife in Egyptian mythology. One of his prominent roles was as a god who ushered souls into the afterlife. He attended the weighing scale during the "Weighing of the Heart," in which it was determined whether a soul would be allowed to enter the realm of the dead.
• This figurine depicts anubis in the afterlife, standing with the scales of justice in his hands, as he ushers the lost souls into the abyss. Souls heavier than a feather would be devoured by Ammit, and souls lighter than a feather would ascend to a heavenly existence. He holds a sacred hieroglyphic sword, showing that he is the enforcer of Justice.
• This is an Ebros exclusive collection. Coke can placed next to the statue is not included with the listing. It is meant to provide size perspective of the item. 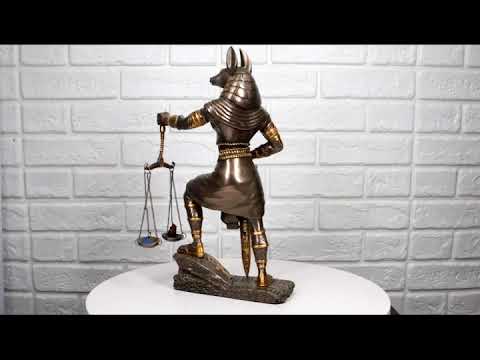