• This President Donald Trump Flipping The Bird Statue is 8.25" tall, 5" long and 4" deep approximately. He weighs about 1 pound.
• This President Donald Trump Flipping The Bird Statue is made of designer composite resin, hand painted and polished individually. Color tone may vary slightly from pictures.
• Considered the wild card of the 2017 presidential nomination, President Donald Trump rose to power and seized a landslide victory over Democratic Candidate Hillary Clinton. President Donald Trump gained support from citizens who felt that they were forgotten by the government and people who demanded change from the 'same old; politicians and political system that has over the years infringed more and more of the rights of citizens. President Donald Trump's slogan is to Make America Great Again.
• This hilarious sculpture depicts the President as a grumpy man whose only priority in the Oval Office is to put America First. He flips the bird with his pouting mouth, as if cursing at the whole world for taking advantage of the USA. He is determined to turn the tides and bring pride and honor back to this beloved country of the United States Of America.
• This is an Ebros exclusive collection. It comes with our Ebros Gift Satisfaction Guarantee when sold by Ebros Gift. Coke can and decor props placed next to the statue are not included with the listing. They are meant to provide size perspective of the item. 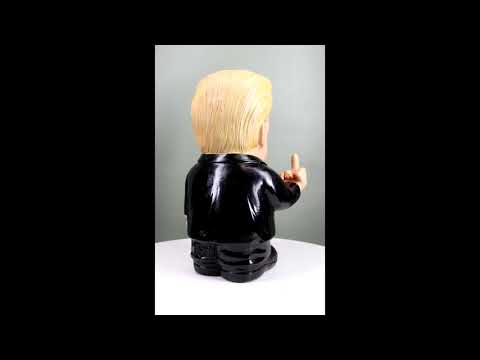