• This Shiva Nataraja figurine stands at 9.5" tall, 9" long and 2.25" deep approximately. It weighs about 1.25 pounds.
• This Shiva Nataraja figurine is made of designer composite resin, hand painted and polished individually. Color tone may vary from pictures.
• This Shiva Nataraja figurine combines in a single image Shiva's roles as creator, preserver, and destroyer of the universe and conveys the Indian conception of the never-ending cycle of time. Although it appeared in sculpture as early as the fifth century, its present, world-famous form evolved under the rule of the Cholas. Shiva's dance is set within a flaming halo.
• The god holds in his upper right hand the damaru (hand drum that made the first sounds of creation). His upper left hand holds agni (the fire that will destroy the universe). With his lower right hand, he makes abhayamudra (the gesture that allays fear). The dwarflike figure being trampled by his right foot represents apasmara purusha (illusion, which leads mankind astray). Shiva's front left hand, pointing to his raised left foot, signifies refuge for the troubled soul.
• Soda can and props placed next to the statue are not included with the listing. They are meant to provide size perspective of the item. 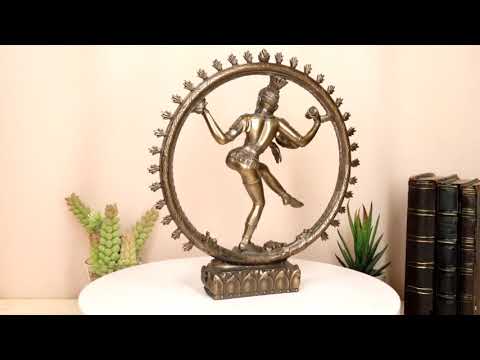