• This Lord Shiva Meditating Statue stands at 7" tall, 6.25" long and 4" deep approximately. It weighs about 2.75 pounds.
• This Lord Shiva Meditating Statue is made of designer composite resin, hand painted and polished individually. Color tone may vary from pictures.
• In Hindu religion, Lord Shiva is one of the three main Gods of the triumvirate i.e. Brahma, Vishnu and Shiva. Lord Shiva is also known as the first Yogi (Adiyogi). Shiva is said to be the eternal origin (seed) of all things, and is considered in Hinduism as the "Lord of all lords".
• This resplendent bronze finish 7-inch tall statue of the Great Lord made in cold cast resin, depicts the Lord in all his breathtaking glory, with snake around the neck, loin cloth, trishul (spear) in hand and sitting majestically on the holy Nandi bull. This will be a great gift for devotees of Lord Shiva.
• This is an Ebros Gift exclusive collection. It comes with our Ebros Gift Satisfaction Guarantee when sold by Ebros Gift. 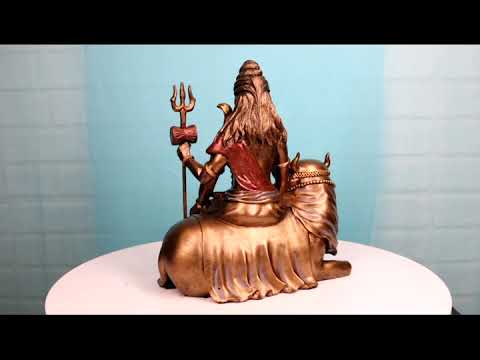