• This Baphomet Horned God Skull Door Knocker Wall Plaque measures 9.5" tall, 9" wide and 2.25" deep approximately. It weighs about 2 pounds.
• This Baphomet Horned God Skull Door Knocker Wall Plaque is made of cold cast polyresin, hand painted and polished individually. The knocker ring is made of cast iron.
• Baphomet is an enigmatic, goat-headed figure found in several instance in the history of occultism. From the Knights Templar of the Middle-Ages and the Freemasons of the 19th century to modern currents of occultism, Baphomet never fails to create controversy. Baphomet embodies the culmination of the alchemical process – the union of opposing forces to create Astral Light – the basis of magic and, ultimately, enlightenment.
• The Baphomet devil takes the form of a Horned God, as portrayed by the sculpture. A dark ghastly skull with large enigmatic horns is set against a lace filigree backdrop. The door knocker sculpture is grandeur in size weighing 2 pounds. It will be a stunning door knocker whether indoors our outdoors.
• This is an Ebros exclusive collection. Coke can and props placed near the item in the photos are not included with the item. 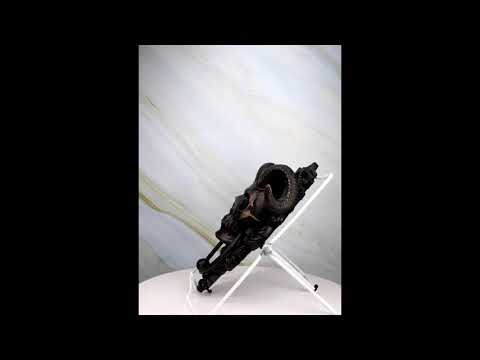